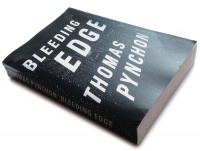 Bleeding Edge
Cover design:
Coming...
Jacket Image:
Coming
Publication date: Sep 17, 2013
It is 2001 in New York City, in the lull between the collapse of the dot-com boom and the terrible events of September 11th. Silicon Alley is a ghost town, Web 1.0 is having adolescent angst, Google has yet to IPO, Microsoft is still considered the Evil Empire. There may not be quite as much money around as there was at the height of the tech bubble, but there’s no shortage of swindlers looking to grab a piece of what’s left.