aldehyde shock
Aldehydic, or modern, perfumes are those with significant notes of the aldehydes which are synthetic compounds, with clean, diffusive, sparkling notes and a family of chemicals. It appears the Pardaugava mini-mobsters got too strong a whiff.

prewar nitro musk and jasmine absolute
Nitro musk is an aromatic synthetic musk (aka white musks, in the perfume industry). These musks are a class of synthetic aromachemicals to emulate the scent of deer musk or other natural musk. Wikipedia

Jasmine absolute is an essential oil derived from the flowers of the jasmine bush, used for fragrance and skin care. Its properties are nervine, antidepressant/euphoric, and aphrodisiac. Interestingly, it is mentioned in Pynchon's Mason & Dixon at p. 456.

LBD
Little black dress? See WIKI.
Yes, that seems to be what it means here. Pynchon has used the acronym already in this book, and this is common attire for female vocalists 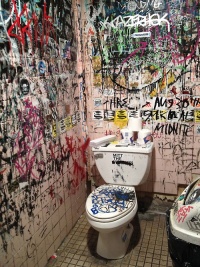 a reverse sillage, a wake from the future
Sillage is the degree to which a perfume’s fragrance lingers in the air after the wearer has departed. It comes from the French word for “wake,” as in the trail left in the sky by an airplane or on the water by a boat. Sillage defines how fragrance diffuses around the wearer, and a strong sillage means that a fragrance projects well. Also, there is a French graphic novel series called "Sillage": Wikipedia