Skull and Bones
Skull and Bones is an undergraduate senior secret society at Yale University, New Haven, Connecticut. It is the oldest senior class landed society at Yale. The society's alumni organization, the Russell Trust Association, owns the society's real estate and oversees the organization. The society is known informally as "Bones", and members are known as "Bonesmen". From WIKI. 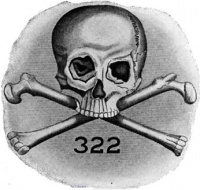