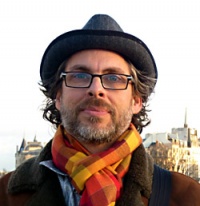 Michael Chabon
Photo: The East Bay Monthly
Wow! writer Michael Chabon delivers a wonderful, insightful review of Bleeding Edge. Chabon's a long-time appreciator of Pynchon and his perspective on the work is unsurpassed, and his 11/07/13 review for The New York Review of Books is illuminating...
"One ought to be accustomed, by now, to Pynchon’s leaving his mysteries unresolved, or at least prepared to give him credit for having done so on purpose. Incompleteness is the inherent vice of paranoid theories of history, the limitation of such theories that Pynchon has always freely acknowledged. Criticism of Pynchon’s “shaggy dog” or sloppy plotting neglects the emphasis that he has always laid on the dual meaning of the word plot. From V. forward, nearly all his novels have been founded on a bedrock of detective fiction and underlayed with science fiction, boy’s adventure, westerns, spy fiction, and other genres that rely, like conspiracy theories, on plotting. His broken plots expose the epistemological brokenness of paranoid systems, which are, after all, nothing but attempts, grander but no less doomed to failure than anyone’s, to make sense of a broken world." Full article » 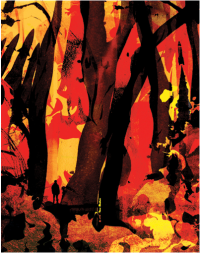 Illustration: Mario Wagner
Jonathan Lethem's review of Bleeding Edge for The New York Times, may be the most intelligent and insightful review of them all. Like Michael Chabon, Lethem gets it!
"[There is] the sheer vitality and fascination, the plummets into beauty and horror, the unique flashes of galactic epiphany, in Pynchon’s method. Our reward for surrendering expectations that a novel should gather in clarity, rather than disperse into molecules, isn’t anomie but delight. Pynchon himself’s a good companion, full of real affection for his people and places, even as he lampoons them for suffering the postmodern condition of being only partly real. He spoils us with descriptive flights." Read the review...