not traditional peanut butter or cheese
In cartoons, mousetraps are always baited with cheese, but in real life, the best bait is generally considered to be peanut butter

blackened alligator
as in blackened rubble

sheep's eyeball
a traditional delicacy in the Middle East

Ürümqi
A city in northwest China, but with a significant Muslim population 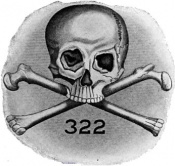 George HW Bush and George W Bush were both members